This morning serenaded by two owls calling back and forth with each other. Has gone on for some time and continues now. Coming from the direction of the park where the owl took up residence this past summer. Never heard anything like this before. 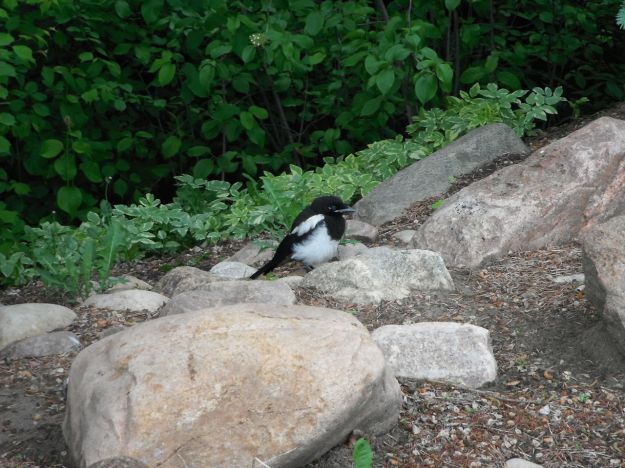 This week baby magpies left the nest in the neighbourhood. So cute with their little tails, concentrating hard on short, inexperienced flights.

This morning I saw something I’ve never seen before – young magpies with light grey markings* where normally they are blue-black. They look so different I wouldn’t have thought they were the same kind of bird, but they were behaving like other young magpies, making the same calls with other magpies, and seemed to be part of a family of normally marked magpies. Possible!?

(*Not pictured here – didn’t have my camera with me!)

A pale owl flapped to the top of a spruce tree in the park this morning, and sat there, stone still. Very rare sighting.

> It’s somewhat warmer today, after a week of chill-you-to-the-bone, and lots of deep snow remains everywhere.

Autumn Robin – One of Many!

This morning all the neighbourhood squirrels are out industriously clipping and dropping long green spruce cones from the trees, creating a steady “plunk” throughout the alleys.

Our resident squirrel – a yearling who has set up shop under our garden shed – is nimbly flowing out to the slender branch tips of the bur oak in his quest for the last remnants of acorns, occasionally slipping in the insubstantial branches and hanging precariously with a squeak! of alarm.

Although no other squirrel is after his treasure mine, he must contend with a curious blue jay who stops by from time to time.