Here is a guest post from my mother, a fellow northern prairie dweller.

Reading at the kitchen table, a movement out the window drew my eyes to the bird feeder. He’s so big compared to the usual visitors; the finches, sparrows and chickadees, that I’m startled. There’s a catch plate attached to the bottom of the cylindrical feeder and he clung to its edge, flapping black wings to keep balanced, his purple head shimmering. He has to stand upright so he doesn’t bump the feeder. He started circling on the plate’s rim, eyeing the cylinder up and down. Almost losing his balance once, he flapped his way back into position.  He looked around as if asking for assistance. “What’s the attraction here, boys, and how on earth do you get anything out of this thing?” Without doubt, the dainty little regulars were keeping well out of the way. Finally he looked closer at the holes and peered in with one eye. Hesitating, he scanned around, then poked in an experimental first try. He snagged a large seed and dropped it. Not to his taste apparently. After three more tries, he finally swallowed his catch, a small seed, and flew away. Perhaps he was disgruntled at such paltry earnings, or maybe his legs were tiring of the awkward position. His selective picking reminded me of a different style of feeding by blackbirds at a different time of year. 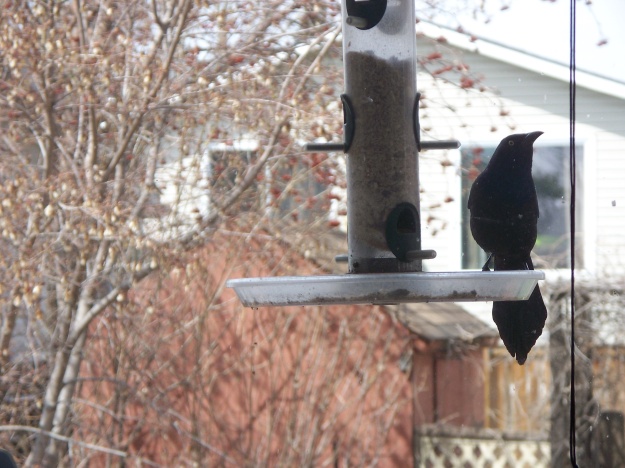 Last summer the blackbirds visited the birdfeeder often. In early summer it was obvious they were feeding a family. They launched onto the catch plate and plunged at the holes with desperation, grasping and swallowing great mouthfuls with no regard for what they caught. It all went down the throat and after loading up as much as they could hold, they’d bolt off; a frantic pace to satisfy a growing, demanding brood.

Without ever seeing a nest, I knew when the young had left to fend for themselves. After a couple of weeks of wild feeding, the adults assumed a much calmer demeanor, cruising in casually to the feeder. They scanned it carefully like experienced connoisseurs and then withdrew a couple of chosen seeds before lazily spreading wings for another favorite diner on their route. I wonder if our new friend of this morning knows the future ahead of him. 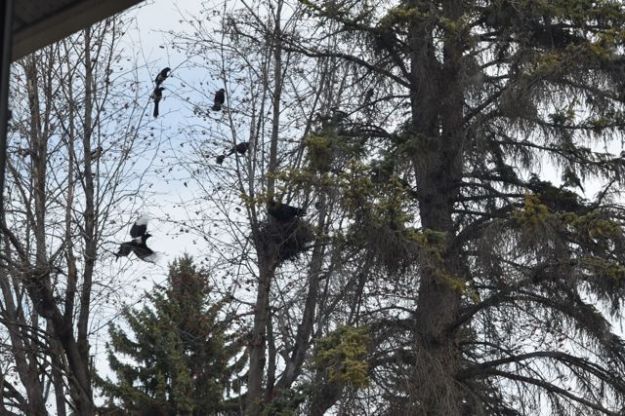 A pair of magpies frequent the rowan tree outside my window.

One morning this winter they were huddled together on a branch, their white breasts gleaming together in the sunlight. 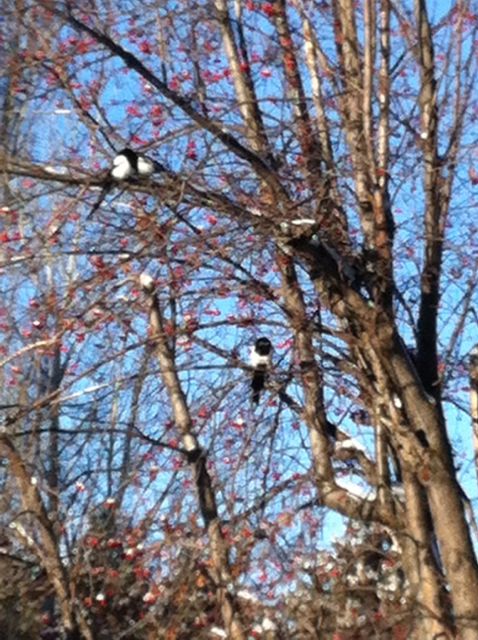 I often see one silhouetted atop a spruce in the distance – a striking tree-topper.

Last month I saw one of them struggling to remove a branch from the abandoned magpie nest in the rowan, and fly with it across the street to a tree in the alley – an early sign of spring!

Three weeks ago this pair were chasing a harassed little red squirrel through the rowan tree (all our squirrels are little and red).

Today a blue jay alighted in the tree with what appeared to be a peanut shell in its mouth. Before long this pair arrived on the scene and chased the jay around the yard and out of sight.

Field to Forest
Create a free website or blog at WordPress.com.