Stayed up late enthralled with a new Joni Mitchell book. Delighted to rediscover in her a fellow dreamer –

I intended to become a hermit when I bought my land in Canada. …

That was after I wrote “Big Yellow Taxi.” I bought the land a year or two after that. I was never going to come back. I was just going to live up there. I thought, “I will never get bored on this piece of land.”

It’s magical. It really is. The mundane aspects of it are magical and then there are two or three things every year that are spectacular — pink rainbow, comets streaking through the clouds, low to the ground. Amazing things. Not to mention I’ve got a blue heron that I have a relationship with, that lives in my bay – big bird. A robin followed me around one year. Everywhere I went, he was hopping around behind me.

A raven was on our front walk this morning, with a prize, and an audience of magpies arrayed in the surrounding branches.

It flew up to the lamppost, then left soon after. So did the magpies – all abandoning the prize alone on the pavement.

We stood at the window and contemplated the harsh realities of predator and prey.

Soon after, we went out and saw the prize close-up –

No – a styrofoam, feather covered little crow figurine, with wires coming out of its feet.

Chickadees out in full force this calm, snowy morning, two nights and one day into this heavy snowfall.

A mystery bird came to the oak trunk and clung upside down there, closely followed by a female Downy Woodpecker with its smart black and white back.

The mystery bird is about twice the size of the chickadees, a little smaller than the woodpecker. Bigger than the nuthatches that frequent this area. Creamy buff breast and darker, greyish back. Shaped like a nuthatch or woodpecker with their short stubby tails.

The Downy meandered up the ant-sheltering oak trunk for a while, hunting, while the mystery bird just hung out, upside down, sheltering on the leeward side of the trunk.

A passing chickadee stopped at the tree and watched the woodpecker hopefully for a while.

My dog and I met a large coyote trotting down a back alley this morning, half a block from the river valley drive. My dog was eager to meet it, so I was relieved when it shyly detoured up into a driveway to avoid us. I’m surprised I don’t see them more often, this close to the valley.

Early this morning, tracks of one, small deer meander through the neighbourhood – a rare happening here (as always, an abundance of hare tracks!)

In honour of our first lasting snow…

Yesterday afternoon set in misty and cold. I had half a mind to spend it by my study fire, instead of wading through heath and mud to Wuthering Heights. … I took my hat, and, after four miles’ walk, arrived at Heathcliff’s garden gate just in time to escape the first feathery flakes of a snow shower.

On that bleak hill top earth was hard with a black frost, and the air made me shiver through every limb. … The snow began to drive thickly. I seized the handle to essay another trial; when a young man, without coat, and shouldering a pitchfork, appeared in the yard behind. He hailed me to follow him, and, after marching through a washhouse, and a paved area containing a coal-shed, pump, and pigeon cote, we at length arrived in the large, warm, cheerful apartment, where I was formerly received.

It glowed delightfully in the radiance of an immense fire, compounded by coal, peat, and wood: and near the table, laid for a pleasant evening meal, I was pleased to observe the “missis,” an individual whose existence I had never previously suspected.

On a mellow evening in September, I was coming from the garden with a heavy basket of apples which I had been gathering. It had gotten dusk, and the moon looked over the high wall of the court, causing undefined shadows to lurk in the corners of numerous projecting portions of the building. I set my burden on the house steps by the kitchen door, and lingered to rest, and draw in a few more breaths of the soft, sweet air; my eyes were on the moon, and my back to the entrance, when I heard a voice behind me say– “Nelly, is that you?”

A wonderful moon! Gateway to Autumn, easing us in slowly, deliciously…

It began with the first inklings of summer’s end:
Two bright yellow jewels in the green grass – the first fallen leaves.
Six geese making their pilgrim way across dusk-darkening sky at 9pm.

And it will end with the autumnal equinox, ushering out Summer.

The apparently vacant stump showed a flurry of activity this afternoon… 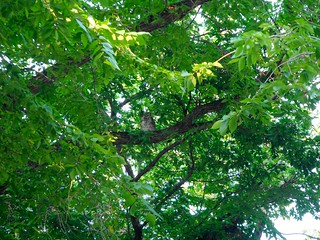 Great Horned Owl sighted Sunday evening within a block of the feathers park!